CONSUMER
The power of consumers is from producers or other consumers. Within this group there is a lot of species, from the small zooplankton to larger predators. It is easy to see that consumers (heterotrophs) depend directly or indirectly from the producers. Animals that consume plant organisms (cow, horse, lobster, giraffe) are primary consumers (or first order). Animals that eat primary consumers (fox, frog, tiger, eagle) are secondary consumers (or second order). Every living organism is a link in the chain. Generally, each chain has two to five or six links, but they rarely possess a greater number of links.
Leaves -> giraffe(two links)
Pasture -> Cricket -> toad (three links)
Chain of six links 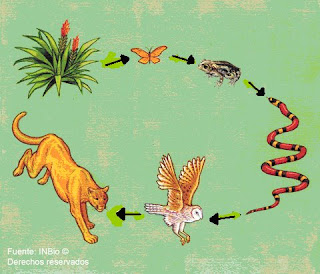 Decomposers and scavengers
The decay organisms are represented by fungi and bacteria, while detritivores, which are organisms that feed on detritus, ie dead matter from decomposition, are protozoan s, millipedes, snails, worms, worms of land, etc.. Protozoa are unicellular eukaryotic organisms such as paramecium, amoebas trypanosomes and, among others. Decomposers and detritivoresare responsible for the disintegration of the dead bodies of plants and animals. In addition, another source of supply of these organisms are animal droppings, hair and wool losing mammals, leaves and fruit of trees that fall to the ground, etc.. While there are many species a community, not is common to see dead animals and remains of plants that endure in ecosystems. The fallen leaves of the trees disappear almost completely in the course of a year. On the floor are animals that eat dead (carrion) and others that feed on plant debris, such as earthworms and some insects. Bacteria and fungi are the main living beings who were responsible for transforming the organic matter in dead organisms and inorganic minerals that remain in the soil at the disposal of green plants to be reused. So are the decomposers those conducting the TRANSFORMINGion of the organic matter into inorganic, and thus the production of nutrients to plants. At least 80% of the material that follows from the plants in a forest is broken by decomposers. Any of the links in a food chain is transformed when he died in inorganic substances by the action of decomposers. Hence the great importance of these organisms in the ecosystem.
In summary, the decomposition of waste produces energy release and transformation of organic substances in inorganic, to gradually disintegrate dead organic matter. Thus decomposers make it possible for producers to capture the inorganic substances for their benefit.
The interaction of living organisms can be graphed as follows: